This blog post is just a follow up/update from Enabling User to Appear Offline on Office Communicator 2007 R2. Almost same post but this one is for Microsoft Lync 2010.

By default, Microsoft Lync 2010 enable users to set their presence to one of the following five states: 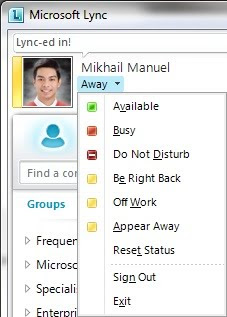 But Administrators can provide users with another option for setting their presence: Appear Offline. When a user selects this option, he or she appears to be offline. In fact, all of the user's contacts see a presence icon indicating the user is offline. For the users to have the option of "Appear Offline" you must create a new registry key and registry value on the computer running Microsoft Lync 2010. For this option that I'm showing is per user or machine setting only, not a Global Setting. Caution: Incorrectly editing the registry may severely damage your system. Before making changes to the registry, you should back up any valued data on the computer. Enable User to Appear Offline:

You know have the "Appear Offline" option on Lync 2010.

For question you can email: mikhail@mimanu.com